Last year was awful.  It rained every weekend, and the mosquitoes were bad.  There was no way to keep up with the weeding and I lost a few more plants due to the roots sitting in water.  Some are now further behind  than the year before.

This year I started weeding with winter coat on, in April. It stayed cool and not very much rain.  Then suddenly there was a heat wave and bang all the peonies were blooming!

I won best in show at the Canadian Peony society AGM show in Oshawa.  What an honor, there was two trophies for the one peony, Pastelegance.  Thank you Judi Denny for presenting! 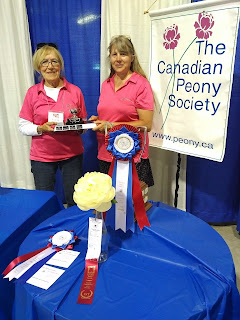 Now let's get down to planting in the fall vs planting the spring.

Here is the proof: 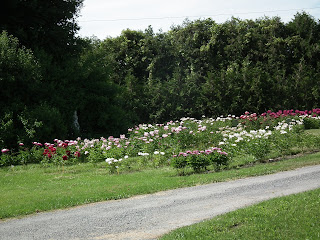 These plants were planted in the fall of 2015.  Most are blooming now and have a great roots system. 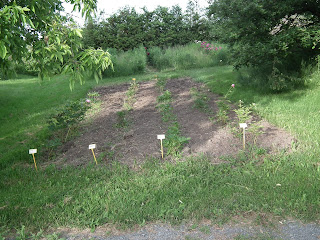 These were dug in the fall of 2015, but planted in the spring of 2016.  They were stored in peat moss in a cool place for the winter. The growing conditions are similar, the root size was the same.
The plants are not as big, not as many have blooms and we even lost a few.
There are two groups that were planted in the spring, both with the same results.
The Canadian Peony Society has been trying to educate the public about growing peonies but, nurseries continue to sell the plants in the spring.  The best way to buy peonies is bare roots in the fall.

I have bought peonies from nurseries, and from growers.  The peonies from the growers with a fall delivery, hands down were better looking plants with more blooms after a few years.  The ones from the containers I always bought as early as possible in the spring and put them in the ground as soon as possible without disturbing the roots as much as possible.  They did look good the first year, but after a few years were not as healthy as the bare roots.

The roots from the pots were more root bound and did not spread out to support a healthy plant as much as the bare roots did.  Healthier plant, better blooms!  Peonies go dormant in the fall, so that is the time to divide or move them.  If you are moving them, cut back some of the root to promote new growth, the plants will do better than if you do not.

When you plant in the fall is it better to mulch if possible.  I use straw to mulch and remove the mulch in the spring.  The mulch will protect the roots from thawing and freezing again in the spring.  This helps to reduce the heaving of the roots.  If you do find a root heaved out of the ground during the spring, add more soil on top before the next cool spill.

Remember, peonies live a long time, pick a spot with lots of sunshine, in well drained soil and they will continue to bring you joy year after year. 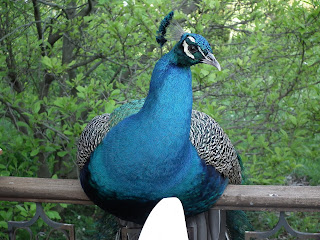